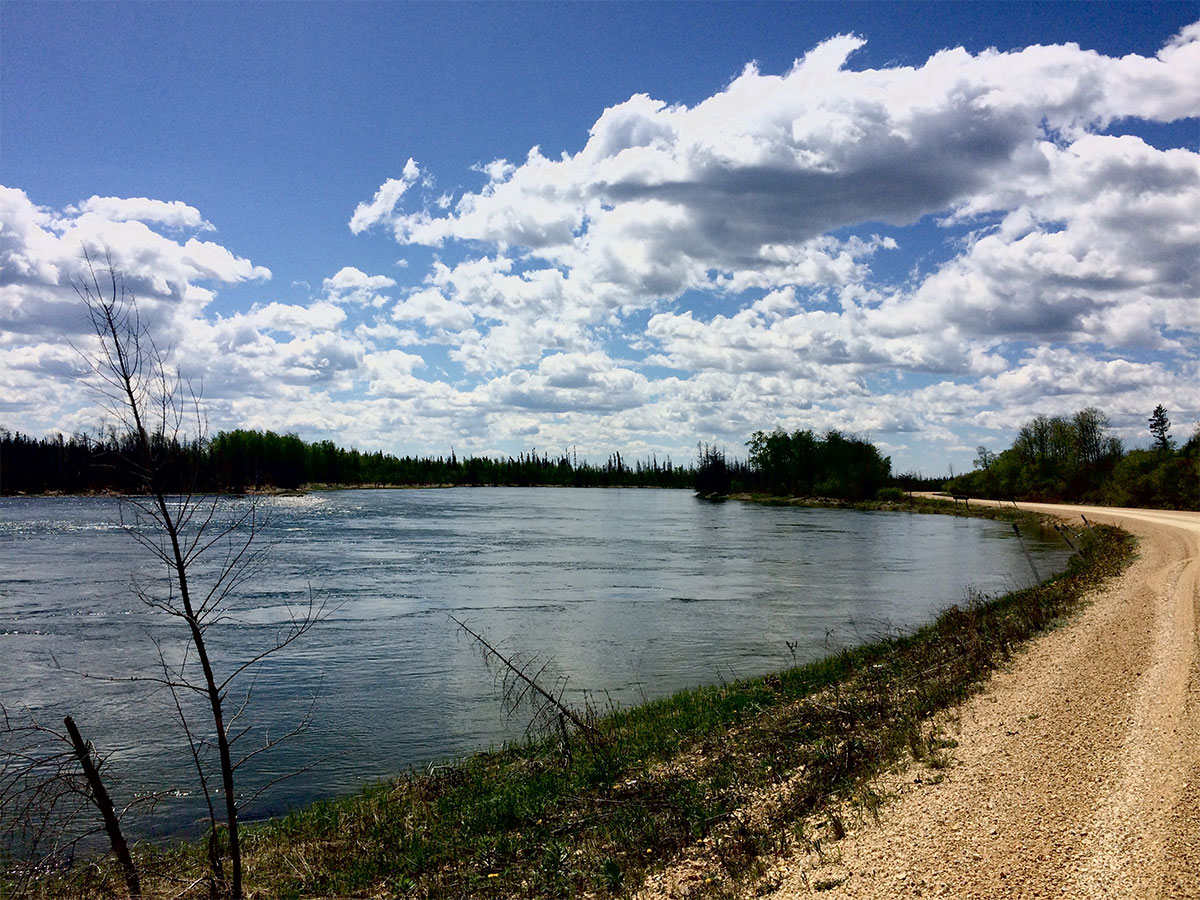 When you mention Manitoba to someone, their first thoughts probably involve vast agricultural fields, prairie grass as far as the eye can see.  And they would be right, for about 1/3rd of the province.  The rest of the province, however, is a wilderness paradise.  Very few roads, thousands of lakes, and a fishery that can only be described as nearly untouched –  once you find yourself off the beaten path.

In the spring of 2017, Amanda’s time was being consumed by traveling around Lake Winnipeg and the Red River tagging walleye for a movement study with Fisheries and Oceans Canada.  The project involves visiting some all but remote areas of Lake Winnipeg, Manitoba.  Walleye are tagged behind the dorsal fin with a numbered tag, as well as a transmitter surgically placed in the abdomen of larger fish.  Movement of the fish are then monitored through a grid of receivers throughout lake Winnipeg and the Red River.  What would I do during this time, I thought?  Tag along and see what I could find for recreational fishing opportunities in some of these locations.  This trip brought us to the Lake St. Martin/Dauphin river area.

We decided to use Benson’s Big Rock Camp on the north west shore of Lake St. Martin as our base.  It was early season, late May, so the park was quiet aside from some of the seasonal campers beginning to prepare their lots for the summer season here.  We arrived to a calm evening on the lake.  Unloaded the boat, set up camp and I fished the shoreline for a couple of hours before the sun set.  The northern Pike were plentiful, and apparently had quite the appetite after the long cold winter.  Ice out was just a week or so before we arrived.  Silver and blue little Cleos were the ticket here, retrieved at a moderate pace. 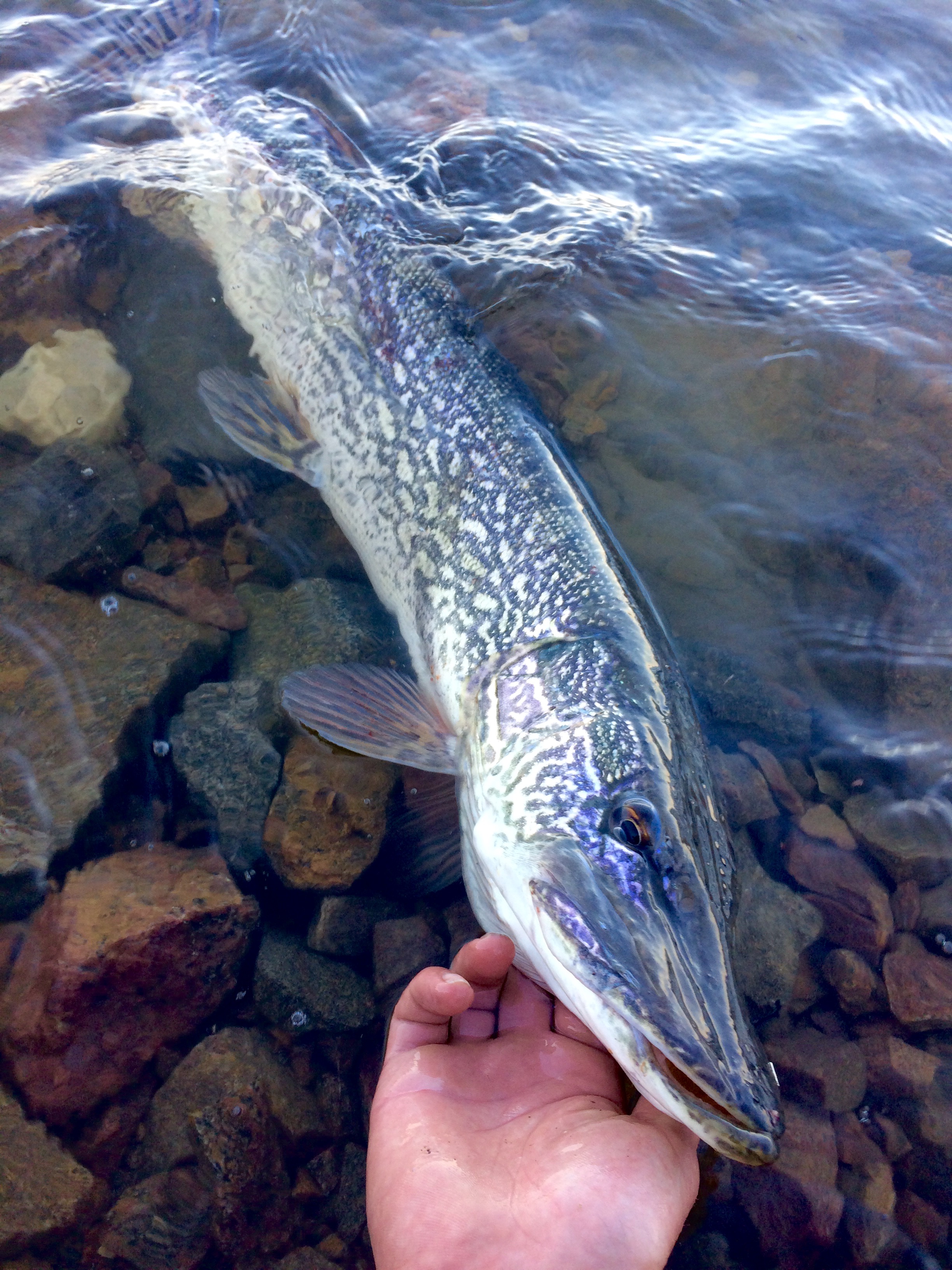 The first morning, I woke up to howling winds and a chill that said summer wasn’t quite here yet.  I stumbled out of the tent, fired up my little butane stove and boiled water for coffee while I made a small fire to warm up a little.  A few minutes later, coffee in hand, I strolled over to have a look at the lake.  I was greeted by whitecaps and a south east wind.  Not a great way to start the day with a 12 foot aluminum boat for transportation. 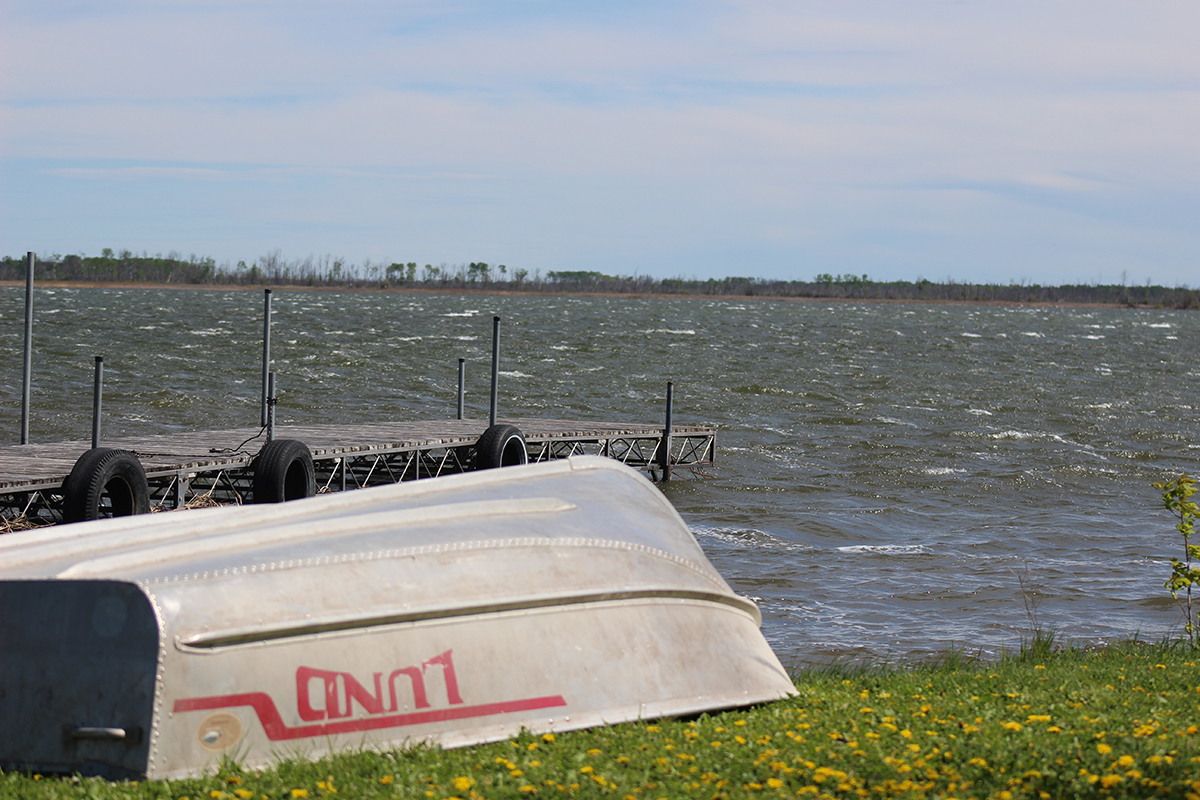 Luck was on my side as I’d done a little preparatory research.  Given the ‘wind’ factor in Manitoba, it’s always a damned good idea to have a backup plan.  Enter Dauphin River.  The river is part of a connection between Lake Manitoba and Lake Winnipeg.  It flows north eastward from Lake St. Martin to finally enter Lake Winnipeg.  I’m going to guess and estimate that the river is about 40-45 kilometers long.  Manitoba Provincial Road 513 follows the river for most of its path from the top end of Lake St. Martin to the mouth of the river at Anama Bay and the community of Dauphin River.

The gravel road from Gypsumville to Anama Bay is long, windy and rough.  I wouldn’t recommend taking a small car down the road, although I’m sure plenty of folks travel this road year round in small vehicles that resemble go-karts.  The scenery is stunning and the wildlife plentiful.  Bears and moose are very common sights, although they tend to move too quickly to photograph.  The birds, however, are much more willing to be photographed.

While the river resembles steelhead rivers in British Colombia and Ontario, there are no trout present in the system.  The river sees a significant migration of walleye that move up out of Lake Winnipeg and into Lake St. Martin where they spend the summer months.  Local anglers were chatty, and warned us that the fish don’t usually move up from the lake until around Father’s day, and late June through September is the best time to target them.  They didn’t speak too highly of the ‘Jacks’, northern Pike, that can be found year round throughout the lake and river.  “The Gators are always around” one of them remarked, with a seemingly disgusted expression.  Little did he know it was ‘gators’ I was after.  I don’t eat everything I catch, and I definitely don’t fish for the sole purpose of limiting out.  Most of my fishing is about the chase, a connection with the natural world so to speak.

Dauphin River did not disappoint.  For a first trip here, we found what we were looking for.  No huge northerns, but they were plentiful, and the number of smaller fish we were catching was definitely an indication that larger fish were around.  Again, long casts with Little Cleo spoons were the ticket in the river, much like the lake the evening before.

For an exploratory outting, this was a success.  Next time, we target the monster Northern Pike that are sure to be around. 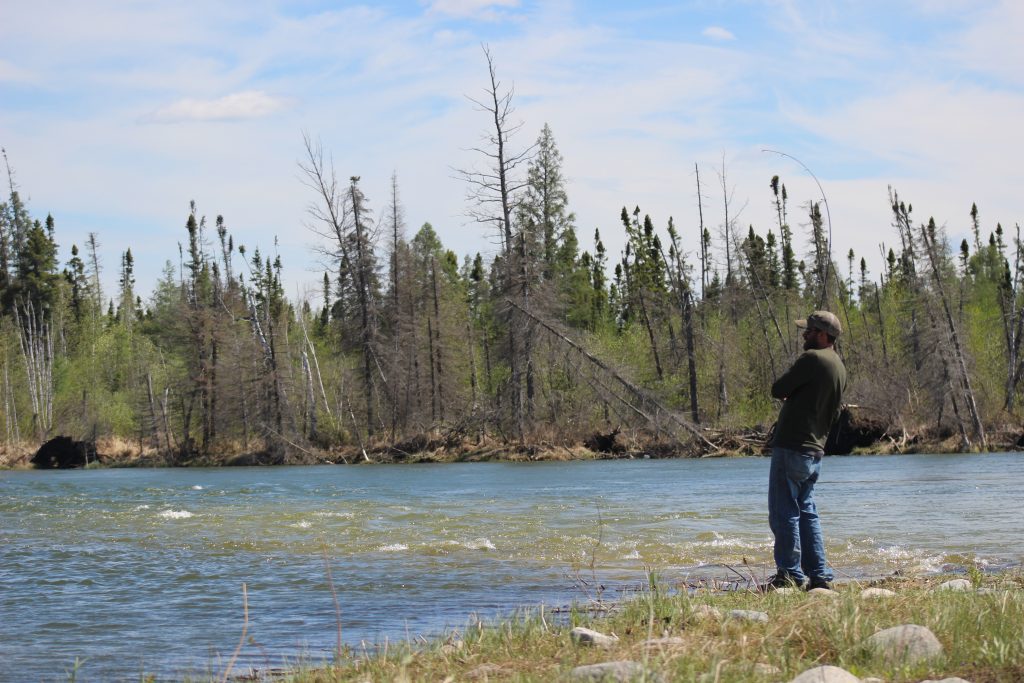 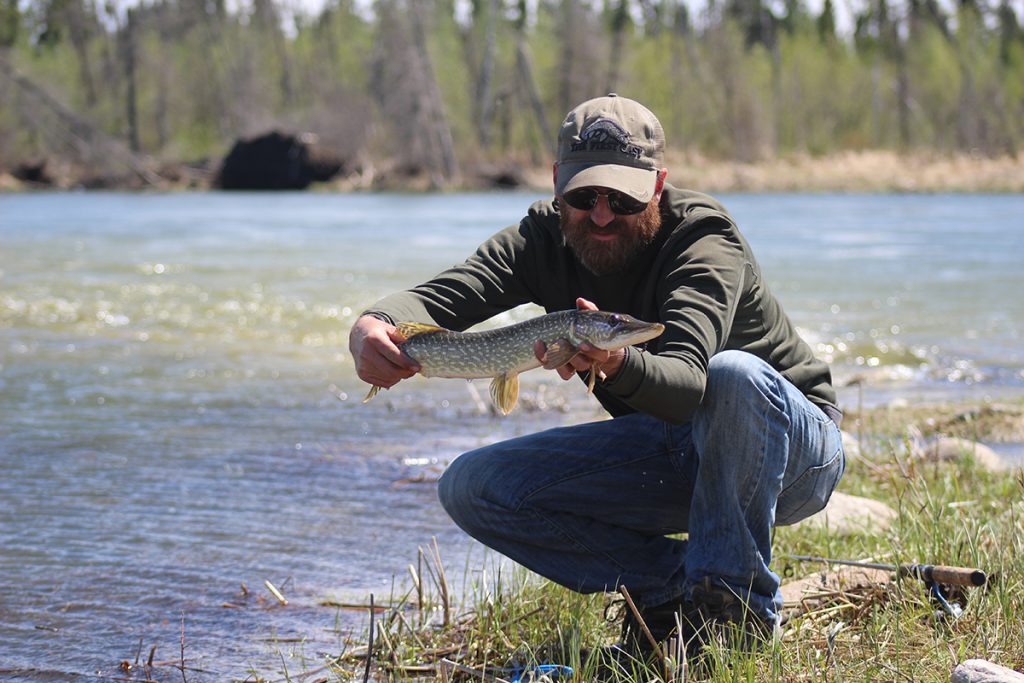 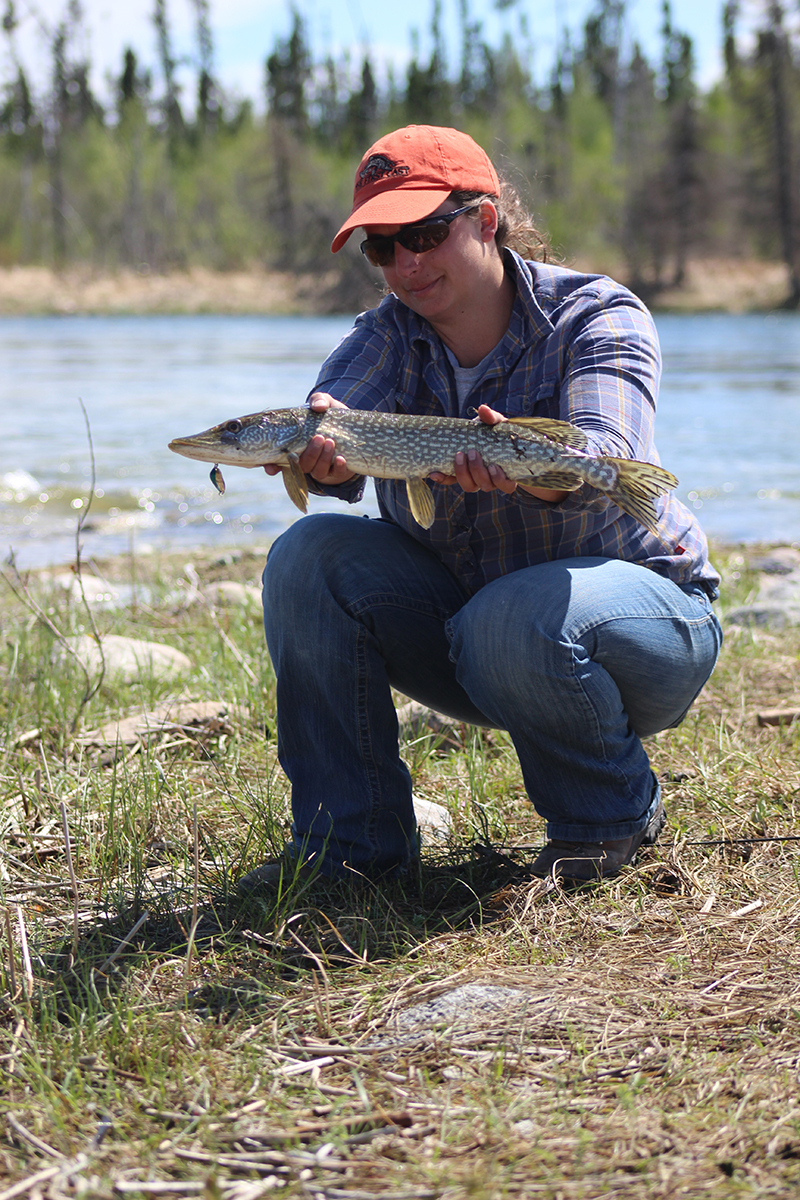