Most of my childhood was spent in the Grey/Bruce area of southern Ontario.  The fishing opportunities are endless.  Bass, pike, musky, trout.  Every waterbody in the area holds something special.  The area has a cult like following for fishing, and in particular, fly fishing.  Fly fishing for giant brown trout (salmo trutta).  Although they aren’t native to North America, butter coloured browns have adapted very well to the area.  It’s hard to find a stream in Grey/Bruce that doesn’t hold them.  I’m a brown trout addict, and I’m not shy to admit it. 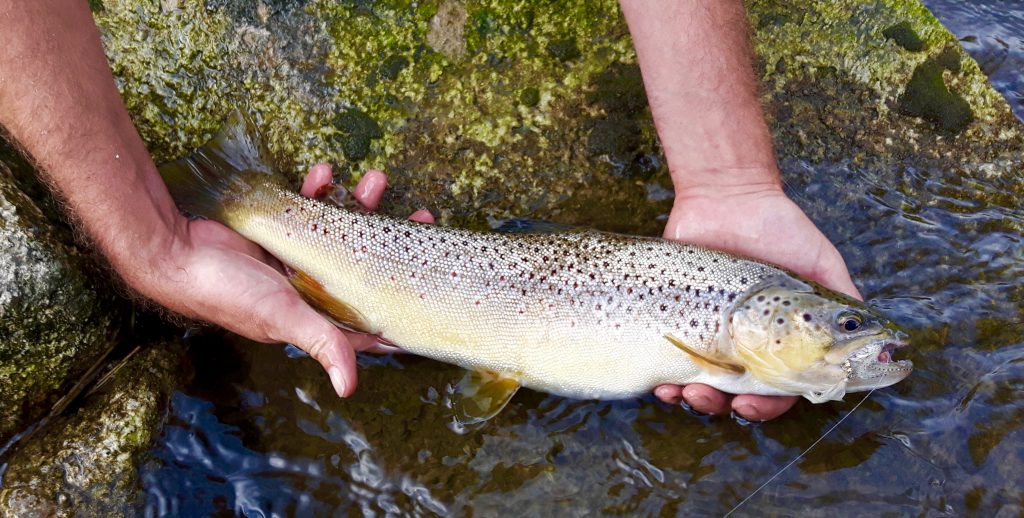 Chasing small brook trout was my childhood in Grey Highlands.  As I grew older and started fly fishing more, the small speckled trout I used to chase became too easy.  I could go anywhere and catch them.  And I still can.  Part of fishing for these little gems is seeing the giant shadows of much bigger fish that would spook while I was sneaking around flailing a dry fly or a nymph around.  I remember the first big brown I ever hooked into.  It was in the town of Hanover, Ontario.  The thing nailed a wooly bugger just downstream of the dam on the Saugeen river in town, in the pool at the bridge.  Nothing much came of that fish.  It was gone as fast as it appeared…taking my fly with it.

Fast forward a decade (or two) and I’m standing in the front of a drift boat with friend Ken Chandler, a guide in the area who’s been fishing Grey County streams for years.  Ken built a custom drift boat to make fishing the area more accessible, in particular the Saugeen River, and to put his clients into areas that are otherwise untouched by the traditional walk and wade angler.  The ‘Geen flows through everything from brutally thick forest and groomed agricultural land, through small and medium sized towns along  its path from its headwaters near Flesherton, Ontario to the mouth at lake Huron in Southampton, Ontario.  Easy access is hard to come by, and it seems every year at least a few access points get signed ‘no trespassing’.  Likely due to inconsiderate dumping of trash, parties and otherwise disrespectful visitors.  With the drift boat, access remains open. 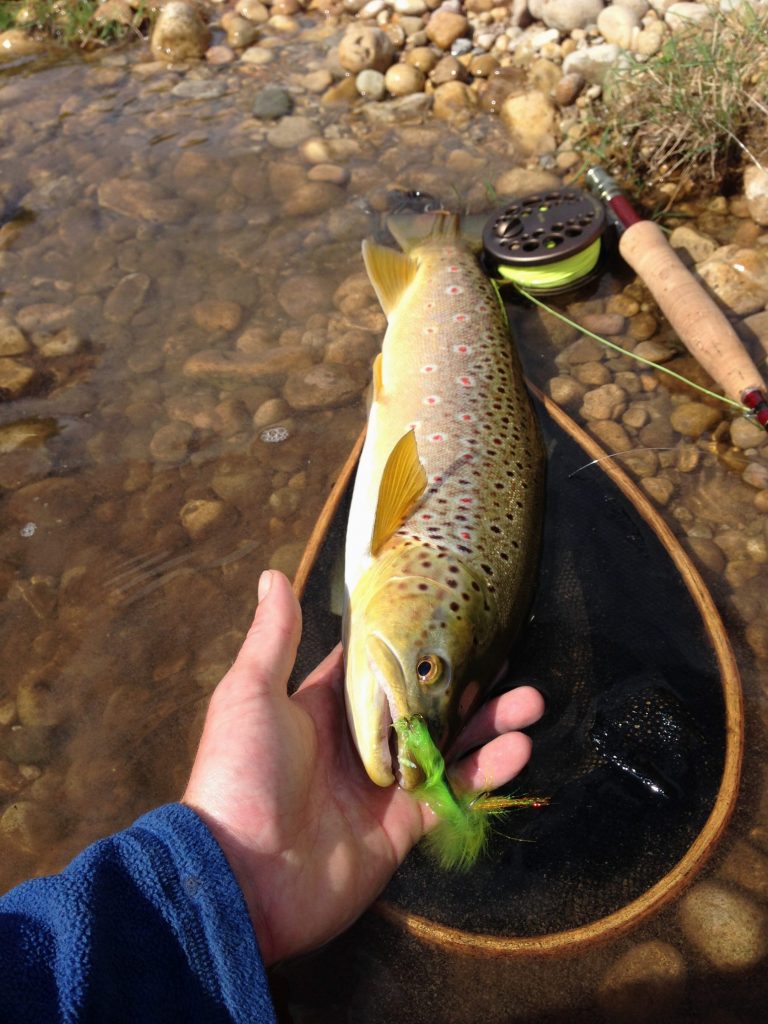 Big browns get big by eating large meals.  Think smaller trout, bait fish, mice, frogs, crayfish, etc.  The less energy a big fish exerts in finding food, the more it retains to grow.  That’s not to say these large trout don’t eat bugs.  They’ll definitely find a comfortable spot in the stream to sit and sip spent drakes from the surface film on warm summer evenings.  The thing is, though, you are more likely to trigger strikes from smaller fish using dry flies, and spooking the larger fish that you didn’t know were there until they bolt upstream when you set the hook on the smaller trout.  If you’re patient, and observant enough, you’ll likely luck out once in a while and find a larger trout taking bugs from the surface.  In these situations, go for it, do your best to match what the fish is eating.  Think hard about what you are going to do.  You’ll likely only get one chance, one cast, before the fish spooks.  They aren’t stupid.

Mature brown trout are extremely territorial.  They don’t like things getting into their space.  Smaller fish will be attacked and killed for trespassing if they get too close.  This is where large, articulated flies like the sex dungeon, zoo cougar and rattle snake become your best ammo, and the enemy of big brown trout.  You’d be surprised at the fish you are missing out on and you’re likely not even aware that they are right there under your nose.

Ripping a big streamer across a pool, along log jams, in front of and behind rocks, etc can elicit some heart stopping boils when these large fish roll, trying to hammer the fly in attempt to kill it.  The key is ripping the streamer across the stream, presenting the fly broadside to the fish.  Most times, fish will be facing upstream.  Retrieving the fly across the current presents the size of it to the trout, usually triggering an aggressive strike.  Of course, there are also times that you’ll use a last ditch attempt to get a fish to move by bringing the fly straight up or down stream.  Especially when you know there is a fish in the area that isn’t as willing to move when the streamer is stripped across the current.

The best time, by far to target big wild browns in the Saugeen river is mid May to mid June.  Water temps are generally favourable in keeping the fish active, and it’s not so warm that you risk causing too much stress on trout during the fight.  Once summer hits, water levels drop and temperatures rise to lethal levels.  Avoid fishing the hot days of summer, and if you do decide to fish, plan around appropriate times like early morning, or after a good cool and heavy rain or thunderstorm.

The entire river holds brown trout at some point in the year.  Brown trout migrate out of lake Huron and move upstream in the fall with other salmon and trout species, to spawn.  Most people will be targeting Steelhead during this period though.  Any water upstream of Walkerton will hold browns year round.  The water between Hanover, upstream to Durham is by far the most productive water.  Access is an issue and you’ll likely need a boat or canoe to have consistent success.  To really up your chances, look for cold water inputs from small creeks and tributaries.

To really up your chances in successfully hunting monster brown trout, consider getting in touch with Ken Chandler for a guided drift boat trip on the Saugeen River.  You won’t be disappointed.  http://www.ontariodriftboatguides.com